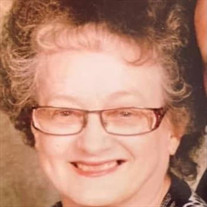 Donna Jean Ford Hayes, 77, of Valley St., Salem, W.Va. departed this life on Thursday, September 30, 2021 in the United Hospital Center, Bridgeport. She was born in West Union, W.Va. on June 13,1944, a daughter of the late Galen Dale and Edna "Maxine" Dilly Ford. She was married to William "Bill" Howard Hayes on West Virginia's 100th birthday, June 20 1963, who preceded her in death February 1, 2018. Surviving are two wonderful sons, William "Todd" Hayes and his wife, Bridget Cooper Hayes, and Michael "Chad" Hayes; and three beloved grandsons, Hunter Cooper Hayes, Holden Bennett Hayes and Heston Raleigh Hayes, all of Salem. She was also survived by her beloved brother, Alan Dale Ford and his wife, Debra Morris Ford, and Alan's daughter and family, Farrah and Tony Johnson, and sons, Isaac and Alex, all of Salem. Donna was a 1962 graduate of Salem High School and a 1966 graduate of Salem College. She obtained a Master's degree plus 45 from WVU. She was a librarian at Harrison County Schools and retired from Liberty High School as librarian in 2010 with forty four years of service. She taught in the Upward Bound Program during the summers at Salem College and SIU for thirty years and also taught an adult computer class at night at Liberty High School for 10 years. Donna was vice-chairman for the Salem Apple Butter Festival and chairperson of the SAB Festival Celebrity Auction since 1988. Donna and Bill were honored to represent Salem in the 2014 Salem Apple Butter Festival as Senior King and Queen. She sold Avon since January 13, 1984. After retiring she organized the Liberty Retirees Luncheon and Retired Librarians Luncheon which meets monthly. She had served as secretary of Salem High School Alumni Reunion since 2013 and organized the yearly Valley Street Yard Sale in 1988 and was a member of the Salem Baptist Church. She was also a member of the WV Association of Retired School Employees. Donna enjoyed craft and antique shopping in Berlin, Ohio Amish Country with family and friends. She was dedicated to her family and pets and will be missed by many. Funeral services will be conducted in the Harbert Funeral Home, 287 W. Main St., Salem on Monday, October 4, 2021 at 2:00 p.m. with Pastor Jon Hayes presiding. Interment will follow in the K of P Memorial Park. The family will receive friends in the funeral home chapel after 11:00 a.m. on Monday until time of services. In keeping with CDC Guidelines social distancing must be practiced and mask must be worn.

Donna Jean Ford Hayes, 77, of Valley St., Salem, W.Va. departed this life on Thursday, September 30, 2021 in the United Hospital Center, Bridgeport. She was born in West Union, W.Va. on June 13,1944, a daughter of the late Galen Dale and Edna... View Obituary & Service Information

The family of Donna J. Hayes created this Life Tributes page to make it easy to share your memories.