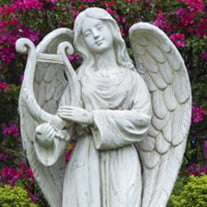 Flora Ann "Flo" Lough Capicola 90 of Clarksburg departed this life on Tuesday, January 22, 2019 in the United Hospital Center.  She was born on January 14, 1929 at Bristol to the late R. Clive and Flora Blanche Haskins Lough.  On October 25, 1969 she married Joseph F. Capicola who preceded her in death on June 13, 2009.   Surviving are one sister in law, Gloria Capicola Cantin, Largo, FL, one niece Leslie Cantin Dominque and her husband Joseph, great nephew, Evan and great niece, Stephanie, Laquna Niguel, CA, several cousins in WV, FL, OH, SD, MT, CA, and AR.   Flo attended Bristol Grade School and was a 1946 graduate of Salem High School as Valedictorian.  She was a 1950 Cum Laude graduate of Salem College where she worked as a student assistant in the office of the President of the college.  Flo also worked for Southern States, Central WV Auto Club, Barnes and Brass Company.  She finished her working career with Salem College with 19 year's service as secretary to the Business Manager for 9 years with her final position being Vice President for Fiscal Affairs.  Flo was an active member of the Salem Business and Professional Women's Club, Clarksburg Altrusa Club and Salem College Auxiliary.  She was a long time member of the Salem Baptist Church where she sang in the choir and served as a junior trustee and currently attended St. James Catholic Church.  Flo was a founding member of Salem Little League where she served as secretary-treasurer for 11 year's.    A Mass of Christian Burial will be celebrated in the Harbert Funeral Home 287 W. Main St. Salem on Friday, January 25, 2019 at 1:00 p.m. with the Reverend Father Akila Rodrigo as celebrant.  Interment will follow in the K of P Memorial Park, Salem.  Visitation will be from after 11 a.m. until time of service. Harbert Funeral Home is privileged to serve the Capicola family.

Flora Ann "Flo" Lough Capicola 90 of Clarksburg departed this life on Tuesday, January 22, 2019 in the United Hospital Center.  She was born on January 14, 1929 at Bristol to the late R. Clive and Flora Blanche Haskins Lough.  On October 25,... View Obituary & Service Information

The family of Flora Ann Capicola created this Life Tributes page to make it easy to share your memories.

Send flowers to the Capicola family.