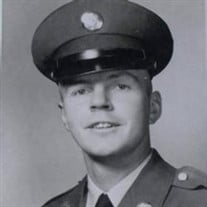 Gary Lynn Cooper, of Salem, WV passed away on Saturday, July 8, 2017 at his home in Salem. He had been in declining health. He was born on October 11, 1939, in Sully, WV. His wife, Carolyn Davis Cooper, of 45 years, survives in Salem. He is survived by his only sibling, Janice Cooper Barnes of Georgetown, Texas; and his daughters all of Salem: Sandra Elliott Kimball and husband, Rikki; Marsha Cooper; and Bridget Cooper Hayes and husband, Todd. He always enjoyed visits from his grandchildren: Jessica Cooper Ash; Colby Kimball Siders; Shelton and Gunner Crim; Hunter, Holden and Heston Hayes; Maddy Watkins, Harmony Armentrout, and Jaxon Ash. Also he is survived by his special friends, Marcia Haskins, Janet Anderson, and the caregivers from Hospice. Preceding him in death were his parents, Bennett Franklin Cooper and Mabel Susan Harr Cooper, who lived in Canaan Valley from 1947 until 1969 when they moved from their farm to Harman. His grandparents also preceded him in death: Abraham Lincoln Cooper and Virginia Bennett Cooper from Dry Fork, and Frank and Caroline Kesner Harr from Canaan Valley. He completed the first grade in Lockborne, Ohio, then attended the second grade at a school in Hendricks, and finished grades three through eight at the Cosner School in Canaan Valley where he lived on his parents’ farm about a quarter mile away. He graduated from Mountaineer High School in Thomas, WV with the class of 1958. Mr. Cooper enlisted in the U. S. Army for three years, and served during the Vietnam era. He became a heavy equipment operator and helped to build roads and bridges. He received an honorable discharge after serving from 1963-1966 in Fort Knox, Kentucky; Fort Leonardwood, Missouri; Korea, Turkey, and Germany. He was employed in North Dakota for a period of time and in the Washington, DC area for a few years. He also worked on the construction of the Canaan Valley State Park in the late sixties before it opened. He spent many years working in various towns all over the state of WV, working for the Rover Construction and Dunn Construction Companies. He was very good at his job operating a backhoe and earned the nickname “Hoe Daddy”.He was an outdoorsman and enjoyed camping with his family, deer hunting, and his “Old Green” 1971 Ford Torino Cobra. Funeral services will be conducted in the Harbert Funeral Home, 287 W. Main St, Salem, on Thursday, July 13, 2017 at 11:00 AM. Interment will follow in the Salem I.O.O.F. Memorial Park with full military graveside rites being accorded by the Combined Doddridge County Veterans Organizations. The family will receive friends in the funeral home chapel on Wednesday, July 12 from 4-8 PM. In lieu of flowers, donations may be made to Amedisys Hospice, 67 Casino Dr, Suite 102, Anmoore, WV. Expressions of sympathy may be extended to the family at www.harbertfuneralhome.com. Harbert Funeral Home is privileged to serve the Cooper family.

Gary Lynn Cooper, of Salem, WV passed away on Saturday, July 8, 2017 at his home in Salem. He had been in declining health. He was born on October 11, 1939, in Sully, WV. His wife, Carolyn Davis Cooper, of 45 years, survives in Salem. He is... View Obituary & Service Information

The family of Gary Lynn Cooper created this Life Tributes page to make it easy to share your memories.

Send flowers to the Cooper family.