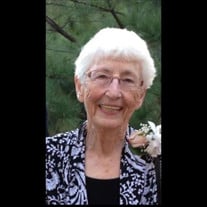 Sara Jean Malone Graham “Sadie” was born in Pittsburgh, PA, on April 5, 1926, to Roy E Malone and Alice Gettys Malone. Shortly thereafter, the family moved to Central WV as Roy joined the Monongahela Power Company. Sadie was educated in the public school systems in Fairmont, Clarksburg & Parkersburg, graduating from Washington Irving High School in 1943. From WI, she attended Potomac State College in Keyser, WV, for two years. Living and working with Ms Shipper, the college librarian, she introduced Sadie to the world of cataloging and preserving books and she developed a love for libraries that lasted the rest of her life. She later transferred to WVU in Morgantown, where she earned a Master’s Degree in Library Science in 1947. She was a lifetime member of Delta Gamma Sorority. Following graduation, Sadie married James A. Graham, who later became Assistant District Attorney for Harrison County. They made their home at Lake Floyd and later in Salem. She returned to the Lake after her husband died and became an active member of “The Beach Bunnies.” She hosted her extended family annually over more than 20 years for the July 4th celebrations at the Lake. She is survived by her son, Jay, and his wife Susie, who live in Littleton, NC, and by Ted and his wife Amy, who live in Charlotte, NC. She is also survived by five grandchildren: Alex, Patrick, Caitlin, Christopher and Alison. Finally, she had a newly born great-grandson, Owen, who, unfortunately, she never saw. She is also survived by her younger brother, Joe, who lives in Saratoga, CA. Her brother Bob, formerly from Albuquerque, NM, before he moved to Lake Floyd, passed away a year ago at the VA facility in Clarksburg. In addition to her immediate family, Sadie was loved by her nephews and their families, and her many Lake Floyd friends. Committed to the field of education, Sadie worked in the Harrison County Schools including Unidis High School in West Milford, Central Junior High School in Clarksburg and Lincoln High School in Shinnston. Finally she worked at Salem College as the Head Librarian for 15 years. Sadie was a lifelong member of the First Presbyterian Church in Clarksburg. She volunteered at several charity organizations including the Harrison County Literacy Volunteers, Quilters at Fort New Salem, the Food Pantry and the Mustard Seed. She dearly loved dogs, having had several Great Danes and a couple of spirited Australian Shepherds. She frequently played golf at both Salem and Lake Floyd golf clubs. A Celebration of Life will be held at 11 a.m. Saturday, September 11, 2021, on Lake Floyd Clubhouse porch. In compliance of CDC guidelines, social distancing must be practiced. Harbert Funeral Home is privileged to serve the Graham family.

The family of Sara "Sadie" Jean Graham created this Life Tributes page to make it easy to share your memories.

Send flowers to the Graham family.