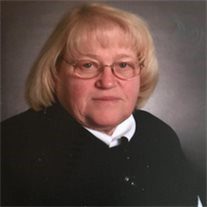 Virginia Lee "Jennie" Givens Hayes from Salem, WV went to be with her Lord and Savior on February 9, 2019.  Jennie was born in Clarksburg, WV on March 10, 1945 the third daughter of the late Raymond and Yvonne Davis Givens. On April 19, 1963, she married the love of her life, Thurman Harlan (Friday) Hayes.   She loved staying busy by cleaning house, cooking and taking care of her family. She loved going to church where she taught Sunday School, BYF, and held many other offices. At a very young age, Jennie remembered going to church with aunts, uncles, and cousins.  In the mid 1950's, they started going to Mt. Olive Baptist Church in Salem.  They went every Sunday morning, Sunday night and week night services. They would gather up the Brown girls and Strother kids and go to church, when she was around thirteen, she pleaded  with her Mom and Dad to take piano lessons. At the age of fourteen, she started playing the piano at Mt. Olive Baptist Church and was the pianist there for fifty years. She will also be remembered as the pianist for the singing group "The Gospel Melodies" who ministered in many area churches. She joined Reynoldsville Baptist Church in 2010 where she also played the piano.Jennie worked at Salem University for thirty years, where she was a loyal basketball fan.     Surviving are two daughters Helen Kaye Burbridge and husband Ronnie of Salem, WV and Dawn Marie Greathouse of Wolf Summit, WV, one son Reverend Jon Hayes and wife Heidi of Reynoldsville, WV, one daughter in law Crystal (Hayes) Ross of Salem, WV.Her mother in law is Gertie Hayes of Salem, WV, Three sisters are Betty Davis and husband, Richard of Salem, WV,  Patty Neely and husband Joe of Maryland,and Ramonetta Holt and husband John of Salem, WV.  Seven grandchildren Raven Hayes, Austin Hayes, Dakoda Hayes, Zachary Hayes, Mason Burbridge, Braiden Hayes and Jacob Greathouse.  Many nieces, nephews, cousins, aunts, uncles and in laws who were very special to her. She will also be sadly missed by her special and best friend Carolyn Plaugher.   Jennie was preceded in death by her husband Harlan of fifty years, her parents Raymond and Yvonne Givens, Her father in law Howard Lee Hayes, Her son Raymond Lee Hayes, and her son in law Eugene Greathouse. And two brother in laws very dear to her William "Bill" Hayes and Kenneth "Kenny" Hayes,     Funeral Service will be conducted in the Harbert Funeral Home 287 W, Main Street Salem on Friday,February 15.2019 at 11:00 a,m, with Pastor Larry McKim presiding,  Interment will follow in the K of P Memorial Park, Salem.  The family will receive friends in the funeral home chapel on Thursday, February 14, 2019 from 12 noon until 8 p.m.  Harbert Funeral Home is privileged to serve the Hayes family

Virginia Lee "Jennie" Givens Hayes from Salem, WV went to be with her Lord and Savior on February 9, 2019.  Jennie was born in Clarksburg, WV on March 10, 1945 the third daughter of the late Raymond and Yvonne Davis Givens. On April 19, 1963,... View Obituary & Service Information

The family of Virginia Lee "Jennie" Hayes created this Life Tributes page to make it easy to share your memories.