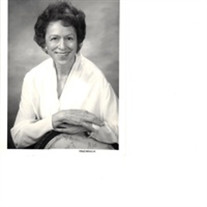 Dr. Virginia Raad, an international recognized musician and authority on French music and art, departed this life in her residence on Saturday, January 27, 2018.  A native of West Virginia born on August 13, 1925 in Salem a daughter of the late Joseph and Martha Peters Raad.   Surviving are her nieces, Spring Keyes, Rachel Michel, Stephania Williams, Diana Collins, Christina Shorall.  She is also survived by her close friends, Cindy Shaver who provided loving care and companionship in her last years; Marlene Cheuvront, Edward B. Davis, August Jordan, Al Romagnonli,Pam and Randy Johnson. Two sisters preceded her in death Margaret (Peggy) Keyes and Martha Harding and nephew, Marc Paparozzi.   Dr. Raad was a graduate of Wellesley College, Wellesley, Massachusetts, where she majored in art history and aesthetics.  She earned a doctorate with highest honors in musicology at the University of Paris as a French Government Grantee.  Dr. Raad represented America at the Debussy Centennial Celebration in France, supported by a grant from the American Council of Learned Societies.   Dr.  Raad gave concerts, lectures and master classes throughout the USA and abroad, appearing frequently at major colleges, universities and preparatory schools.  She published regularly in professional journals.  Her last book was on the composer Claude Debussy.  She recorded Debussy's work for EDUCO.   As an adjudicator, Dr. Raad made many trips for the West Virginia Music Teachers Association. She served as musicology program chair for the national association, the West Virginia Federation of Music Clubs and the National Guild of Piano Teachers.  Dr. Raad was a grant reviewer for the American Society for Aesthetics and National Endowment for the Humanities.  She was a Committee member for the National Endowment for the Arts.   Dr. Raad received numerous awards for the development of an intimate type of lecture concert for college students that has been emulated throughout the world.  Though Dr. Raad lived much of her life in Salem, she traveled thousands of miles in what became a highly individual and singular enterprise in both education and the concert world.  Her endeavor was to encourage each individual to enlarge his or her vision of the arts.  She is listed in WHO'S WHO IN AMERICAN, THE WORLD WHO'S WHO OF WOMEN and the INTERNATIONAL WHO'S WHO IN MUSIC AND MUSICIANS DIRECTORY.   A Mass of Christian burial will be celebrated in the Sacred Heart Catholic Church, Salem on Wednesday, February 7, 2018 at 10:00AM with the Reverend Father Akila Rodrigo and the Reverend Father William Anderson as concelebrants.  Interment will follow in the Shinnston Memorial Cemetery.  The family will be received in the Harbert Funeral Home 287 W. Main St. Salem on Tuesday, February 6, 2018 from 5-8PM.  A prayer service will be held in the funeral home chapel at 7:30PM which will conclude visitation.  Expressions of sympathy may be extended to the family at harbertfuneralhome.com. Harbert Funeral Home is privileged to serve the Raad family.

Dr. Virginia Raad, an international recognized musician and authority on French music and art, departed this life in her residence on Saturday, January 27, 2018.  A native of West Virginia born on August 13, 1925 in Salem a daughter of the late... View Obituary & Service Information

The family of Dr. Virginia Raad created this Life Tributes page to make it easy to share your memories.

Send flowers to the Raad family.